Siuslaw and Kuitsh: Native Americans of the Oregon Coast 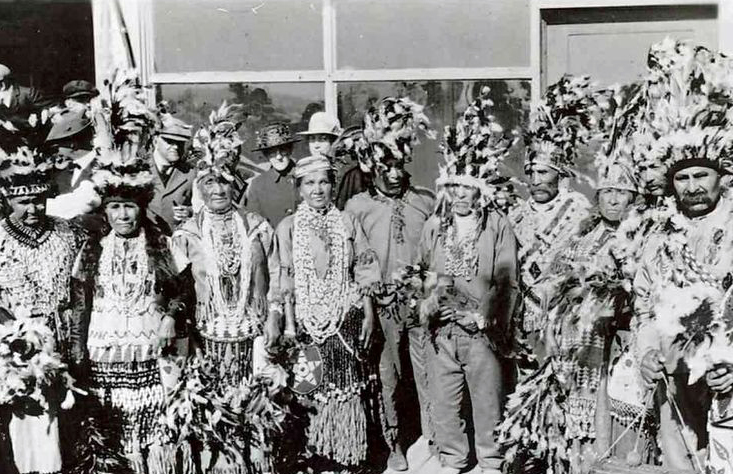 The Siuslaw and Kuitsh (Kalawatset) are a Native American ethnic group. They are members of the Confederated Tribes of the Coos, Siuslaw and Lower Umpqua Indians. The Siuslaw traditional homelands were on the Central Oregon Coast of Western Oregon. 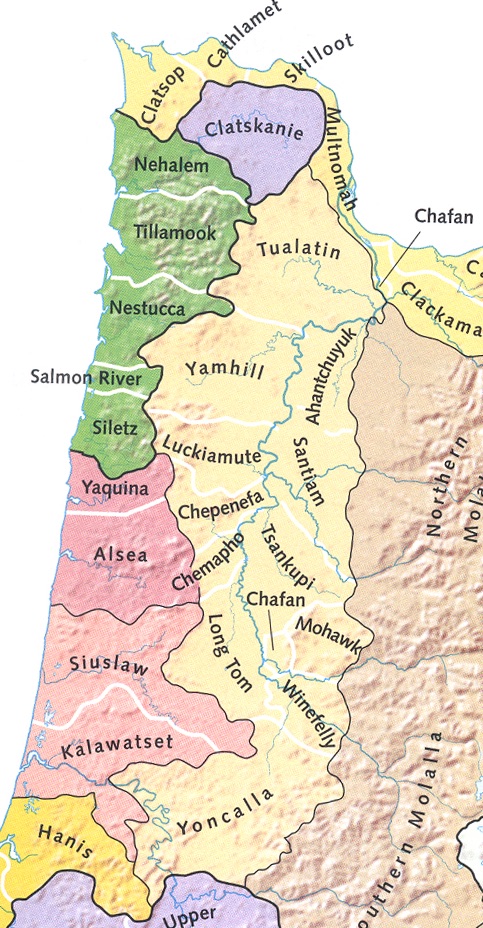 The Siuslaw and Kuitsh (often called Lower Umpqua or Kalawatset) peoples were two closely related American Indian tribes who lived along the Central Oregon Coast, around the modern cities of Reedsport and Florence. The Siuslaw lived mainly around the estuary of the Siuslaw River, leaving during summer to travel upriver and into the hills of the Coast Range. The Kuitsh had their winter villages around Winchester Bay, at the mouth of the Umpqua River. The whole coast held by the two peoples was about 50 miles in length, from Cape Perpetua in the north to the Tenmile Lakes in the south. In summer, both peoples wandered probably as far as the Willamette Valley, and there is a tradition of a Siuslaw village in the Lorane Valley, southwest of Eugene. Kuitsh fishing camps were common up the Umpqua River as far as the modern town of Scottsburg.

The indigenous landscape was very diverse. The Siuslaw and Lower Umpqua rivers and estuaries were the dominating factor in the local economy, providing fish and shellfish. Good fishing was available from a chain of freshwater lakes, including Siltcoos and Tahkenitch Lakes, which lay behind a band of coastal dunes. The rivers provided a highway into the Coast Range, which lay to the east of the tribal territories. In the mountains, hunting and gathering were major summer activities. The whole landscape was heavily timbered, except along the sand dunes. An underbrush of alder and berry bushes was thick and luxurious, making travel arduous. To some extent, this also protected and isolated the Siuslawans.

The Siuslaw and Kuitsh lived in a mild, rainy, marine climate with ample resources of fish, plants, timber, and game. They followed a seasonal round of hunting and gathering, moving each season to harvest salmon, berries, elk and deer, camas bulbs, fern roots, and shellfish. Occasionally, they hunted seals and sealions, and any stranded whale was eagerly rendered for blubber and oil. However, they probably did not engage in open-ocean whaling or sealing.

Human occupation of the Oregon Coast is being constantly reevaluated, and dates of occupation are being pushed further back. Currently, it is believed that people began settling the coast over 9,000 years ago. The Siuslaw and Kuitsh people are therefore of great antiquity. They have probably lived in the same locations for hundreds of generations.

The Siuslaw and Kuitsh built large, high-prowed canoes up to 20 feet long, carved out of cedar logs. They were mainly for river and bay travel, as open ocean sailing was very risky. However, a few ocean-going canoes were imported from the Alsea and Chinook to the north, who specialized in such sturdy canoes. 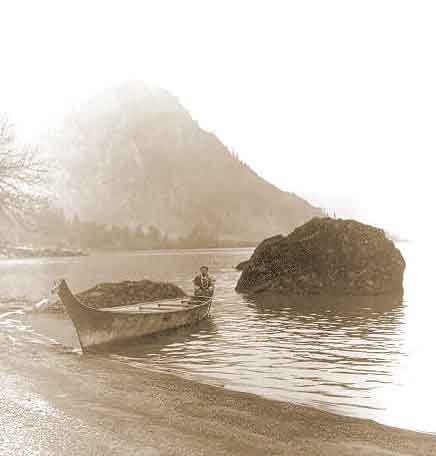 Lodges were semi-subterranean, up to 50 feet long, built of split and smoothed planks, with an oval entrance. The roof was gabled with a single ridge pole. Racks along the ceiling stored dried food, baskets, tools, and personal possessions. The interiors were lined with mats. Sweat houses were often dug into hillsides. Basketry was ornate and prolific, but pottery was not practiced.

The Siuslaw toolkit included a wide array of hunting, fishing and woodworking tools, including toggle harpoons. Hunting tools doubled as weapons of war. Bows were made of yew and vine maple, and the Siuslaw held them at a horizontal angle to shoot. Like some of the Athapaskan people to the south, elk-hide armor was used.

Clothing was appropriate to the season. In the warm summer it was minimal, but during rain or cold, tanned hide or plant fiber clothing was worn. Men wore belted buckskin shirts and leggings, and water-repellent capes of cattail or shredded bark were used during the long rainy season. Women wore long fiber or hide dresses or skirts, and flat-topped woven basket hats. Regalia and ceremonial gear were signs of wealth, and included woodpecker-scalp headgear, dance costumes, and decorated belts and headbands. Moccasins were only used on long trips – the climate and landscape were so wet that bare feet were more practical.

Tattooing was practiced, especially among women who marked their wrists and legs. The commonest tattoos were lines on the arms, as a ready-made calculator for measuring strings of valuable dentalia. Edward S. Curtis in 1923 photographed an elderly Tolowa man (100 miles to the south) with these distinctive tattoos. Hair was straight and black, and men often wore bushy mustaches. Men and women were quite short, averaging from 5′ to 5′ 6″.

The Siuslawans represented the southern limit of the practice of distinctive head-flattening that was common along the Columbia River to the north, and by extension along the northern Oregon coast. There is a tradition that they tried and failed to introduce this “prestigious” custom, which in much of the Northwest marked the aristocracy from the commoner or slave.

The Siuslawans were a well-nourished people, probably in better health than 18th century Europeans. Food resources were reliable and abundant, and supported a population of several thousand. Starvation was seldom a problem, although there may have been some dietary deficiencies such as Vitamin C. More likely causes of illness and mortality were injuries from hunting and fishing, and possibly from warfare and interpersonal violence. The population was much more disease-free than their European and Asian contemporaries – there were only about a dozen important infectious diseases native to the Western Hemisphere. Unfortunately, this also meant that any resistance to Old World pathogens had long since vanished from the Siuslaw population.

The Siuslaw and Kuitsh did not define themselves as a people in a political or even a linguistic sense, in the way that modern nations and ethnic groups define themselves. Almost all organization was at the village level, which was based on related males, with their wives and children. Essentially, everyone outside the village was a “foreigner”. However, women married outside their village, and each village had extensive relationships of marriage, trade and alliances with their neighbors. Some people probably spoke several of the nearby languages to facilitate their relationships, or used trade and sign languages. Villages combined to meet special threats, like an alien slaving expedition or other regional catastrophe.

Much of local life was focused on wealth and its acquisition. Subsistence was seldom a problem, and social ranking was largely determined by personal wealth, as represented by valued possessions such as dentalia (a shell “money” from Vancouver Island), woodpecker scalps, abalone and olivella shells, and decorated regalia. 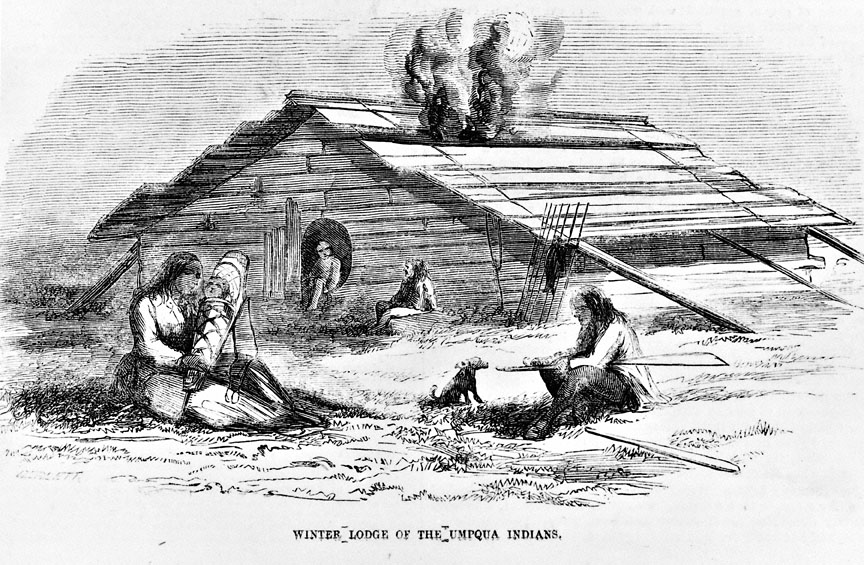 Society was quite stratified, probably into four “classes”. The elite were defined by wealth and its attendant prestige, and below them were progressively poorer people of lesser status. At the bottom were the slaves, who were rather few in this area. It was possible to fall into slavery from gambling debts, but only the wealthiest people held slaves. The Siuslaw and Kuitsh were often themselves raided by other peoples for slaves. Each village had a chief or leader, usually a wealthy and respected man who mediated village disputes, imposed fines, and made sure that wealth was distributed to the less fortunate. Bride price was an important factor in setting one’s status for life, and marriage and its financial obligations played a very important role in stabilizing and integrating the society.

Little is known of Siuslawan religion, but it probably closely followed neighboring Coosan forms. There were shamans, probably of two types – doctors who trained intensively to cure illness through magic, and priestly shamans who elaborated various tribal rituals. Ritual purification was carried out for women after childbirth, at first menstruation, for anybody who had killed (in battle or in murder), or anybody who had handled a cadaver. Both types of shamans were feared for their power, and were sometimes killed.

Dances, games and feasts were popular activities at various important times of the year, such as first elk and first salmon of the season. Winter was the season for story-telling, when the galaxy of stories from the oral literature were recited for old and new audiences (many of these extraordinary tales were recorded by Leo Frachtenberg in  his book Lower Umpqua Texts). Gambling, as in all of Western Oregon, was a serious pastime, using beaver-teeth dice; and shinny (a ball game similar to hockey) was probably played.

Spanish and Asian ships may have contacted the Siuslawans in the 17th and 18th centuries. There is ample evidence of Chinese coins and pottery from the northern part of the Oregon coast. Coos tradition recalls a visit from a Japanese junk, which returned across the Pacific with some local people as passengers. One important geological event took place on Jan. 26, 1700. A monster earthquake calculated at 9.0 on the Richter scale tore apart the Pacific Northwest coastline from Washington state southwards. The effect on the Siuslaw is unknown, but probably many villages were wrecked or inundated by tsunamis.

In the late 18th century, British, Russian and American traders appeared along the coast in increasing numbers, introducing iron and textiles, but also a wave of disastrous epidemics. The first smallpox appeared on the Oregon Coast in 1775, probably introduced by Spanish sailors. Another smallpox epidemic broke out in 1801, and from then on measles, whooping cough, influenza, syphilis and dysentery visited the coast in a deadly series. In 1830 a sickness now believed to be malaria carried off thousands of Western Oregon people, and the Siuslaw population may have been halved again by smallpox in 1836, although at this point a small immunity was beginning to develop. Overall, population plunged from about 3,000 to a few hundred in 30 or 40 years.

In 1828, the Kuitsh attacked and wiped out the Jedediah Smith exploring party at the mouth of the Umpqua, leaving only 3 survivors. Around the same time the Siuslaw destroyed a Chinookan slaving expedition. In the 1830s, huge forest fires devastated the Coast Range landscape, disrupting the local economy and resource base. By the time the settlers arrived in this area in the 1850s, the two peoples had been drastically reduced in number. Open warfare with settlers never afflicted this region of the Coast, but the local tribes were shattered by the combined effects of epidemics, environmental devastation, and cultural extinction.