Read about Geospatial Technology at LCC...

About 35,000 years ago, on the walls of caves near Lascaux, France, Cro-Magnon hunters drew pictures of the animals they hunted. Associated with the animal drawings are track lines and tallies thought to depict migration routes. While simplistic in comparison to modern technologies, these early records mimic the two-element structure of modern geographic information systems, an image associated with attribute information.

Possibly the earliest use of the geographic method, in 1854 John Snow depicted a cholera outbreak in London using points to represent the locations of some individual cases. His study of the distribution of cholera led to the source of the disease, a contaminated water pump within the heart of the cholera outbreak. 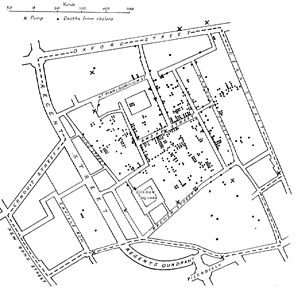 (E.W. Gilbert's version (1958) of John Snow's 1855 map of the Soho cholera outbreak showing the clusters of cholera cases in the London epidemic of 1854)

While the basic elements of topology and theme existed previously in cartography, the John Snow map was unique, using cartographic methods not only to depict but also to analyze clusters of geographically dependent phenomena for the first time.

The early 20th century saw the development of "photo lithography" where maps were separated into layers. Computer hardware development spurred by nuclear weapon research would lead to general purpose computer "mapping" applications by the early 1960s.

The year 1962 saw the development of the world's first true operational GIS in Ottawa, Ontario, Canada by the federal Department of Forestry and Rural Development. Developed by Dr. Roger Tomlinson, it was called the "Canada Geographic Information System" (CGIS) and was used to store, analyze, and manipulate data collected for the Canada Land Inventory (CLI)—an initiative to determine the land capability for rural Canada by mapping information about soils, agriculture, recreation, wildlife, waterfowl, forestry, and land use at a scale of 1:50,000. A rating classification factor was also added to permit analysis.

CGIS was the world's first "system" and was an improvement over "mapping" applications as it provided capabilities for overlay, measurement, and digitizing/scanning. It supported a national coordinate system that spanned the continent, coded lines as "arcs" having a true embedded topology, and it stored the attribute and locational information in separate files. As a result of this, Tomlinson has become known as the "father of GIS," particularly for his use of overlays in promoting the spatial analysis of convergent geographic data. CGIS lasted into the 1990s and built the largest digital land resource database in Canada. It was developed as a mainframe based system in support of federal and provincial resource planning and management. Its strength was continent-wide analysis of complex data sets. The CGIS was never available in a commercial form.

In 1964, Howard T Fisher formed the Laboratory for Computer Graphics and Spatial Analysis at the Harvard Graduate School of Design (LCGSA 1965-1991), where a number of important theoretical concepts in spatial data handling were developed, and which by the 1970s had distributed seminal software code and systems, such as 'SYMAP', 'GRID', and 'ODYSSEY' -- which served as literal and inspirational sources for subsequent commercial development -- to universities, research centers, and corporations worldwide.

By the early 1980s, M&S Computing (later Intergraph), Environmental Systems Research Institute (ESRI) and CARIS emerged as commercial vendors of GIS software, successfully incorporating many of the CGIS features, combining the first generation approach to separation of spatial and attribute information with a second generation approach to organizing attribute data into database structures. In parallel, the development of a public domain GIS was begun in 1982 by the U.S. Army Corp of Engineering Research Laboratory (USA-CERL) in Champaign, Illinois, a branch of the U.S. Army Corps of Engineers to meet the need of the United States military for software for land management and environmental planning. The later 1980s and 1990s industry growth were spurred on by the growing use of GIS on Unix workstations and the personal computer. By the end of the 20th century, the rapid growth in various systems had been consolidated and standardized on relatively few platforms and users were beginning to export the concept of viewing GIS data over the Internet, requiring data format and transfer standards. More recently, there is a growing number of free, open source GIS packages which run on a range of operating systems and can be customized to perform specific tasks.